Weis, Lion King Cast Ready To Put On A Show

Torri Weis thinks you really should come out to a public performance of The Lion King Jr. this weekend.

“It’s a very family show, things for kids and adults, like classic old Disney movies are always a hit with parents,” says Weis, who portrays the lioness Nala. “I think it would be good for anyone to see how we do it.”

While it is actually the character at different stages of life, Weis is tackling both the younger and older versions of Nala.

Weis welcomed the dual work. The veteran of the Booneville High School Drama Department split roles of Lord Farquaad and Olaf in Frozen in 2021, and is in her fourth play with the department with roles in Shrek and Hairspray.

She doesn’t lack for confidence or sense of humor. She believes her characters are well done – she really knows her lions.

“When I was practicing I took my book and looked up The Lion King Jr. play on YouTube and I would skip to the scenes where I had lines and I would read my line out loud with the person who was playing Nala (in the video),” said Weis. “It helped me a lot.”

Transitioning from the younger to the older versions of Nala requires both a wardrobe and makeup change while her cast mates are taking their turn in the spotlight.

That spotlight is actually manned by Weis’ brother Ozzy, to whom she hasn’t afraid to offer “instruction,” during preparation for this weekend’s performances.

High  school and junior high students are scheduled to view it as well, but that was pushed back to Monday due to the weather.

Tickets are $5 in advance at the high school office and $10 at the door. Any pre-purchased tickets are good for any performance.

Though she’s a senior and closing our her time on the BHS Auditorium stage, Weis doesn’t expect to say goodbye to performing when the final curtain closes on The Lion King.

“I am minoring in theater in college and majoring in education,” said Weis. 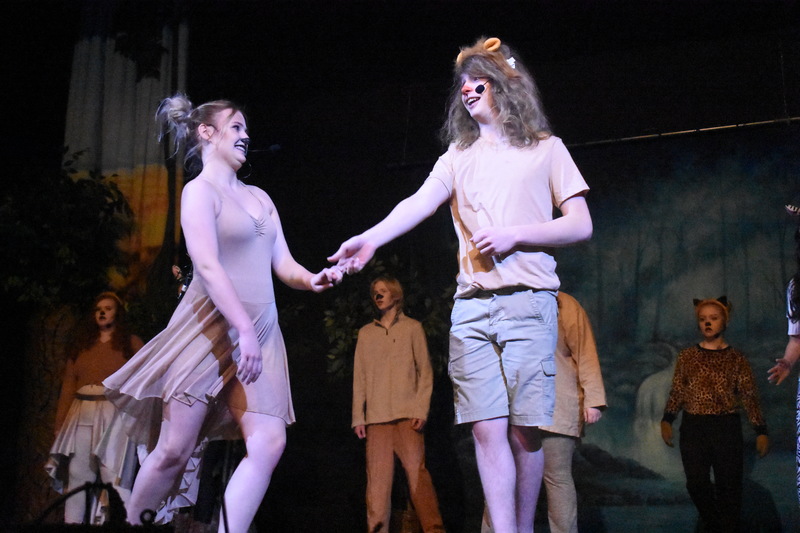